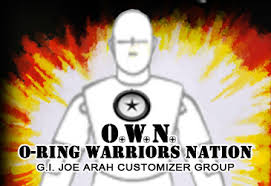 That's right, this is what it has come to...

I met Nova for the first time in person at SlayerCon 2 in 2012 but before that, we traded a few times on Joecustoms. We had many things in common and he told me he was a huge fan of my custom work and I liked his customs as well. I thought of him to be a friendly and trustworthy person and we corresponded from time to time talking about joes.

In 2013, Nova asked me if I would be interested in a partnership of creating some custom ARAH parts to be cast by him to sell. At the time there was a severe shortage of custom ARAH casts available online so I jumped at the chance. As I already knew that cast ARAH parts is a niche market and not quite a profitable one so instead of money, all I wanted in exchange was free cast parts anytime for the asking. Nova agreed. I first modded a few parts for him at his request until I created the Blue Beret Commando head, torso, and waist kit. I sent him the parts and he made molds of them. After casting a considerable amount of them, he asked me how many Blue beret kits I wanted. I asked for 8 sets, which he sent me and I customized with. He began offering and selling the Blue Beret kits online and through travelling to various joe shows and conventions. Everything seemed great.

Sometime time later, I contacted him again asking to send me some more Blue Beret kits. I ended up making several attempts to contact him via PM, email, and text but my overtures went unanswered. I fully understand that everybody gets busy from time to time and that we all have our lives to live away from our hobbies but nothing could explain Nova's total lack of communication. Days turned to weeks and then months before I heard anything. I was a little worried as he hadn't been on joecustoms in a long while so I began asking around if anyone knew how to best get in contact with him or knew what was going on with him and why he went dark. I was then told that he was very active on Facebook. I am not a member of Facebook but I continued trying to contact him, hoping he would finally answer me but still nothing. As even more time passed, I began questioning myself why he would just completely ignore me. Did I possibly do or say something that offended him? I thought we were friends. I am confused and left with more questions than answers. After getting someone to contact him on my behalf, he finally texted and tried to explain why he was unresponsive. He tells me that he thought our business was concluded ater sending me the first Blue beret kits. He then says when I asked him for more Blue Beret kits, he wasn't sure if I expected more kits at no cost and he didn't want to ask and offend me and he froze up. I then had to remind him of our original deal, in exchange for sculpting parts for him to cast, I get free cast parts anytime I ask. He apologizes and tell me he wishes to continue our arrangement and that he will be more communitive from now on. He finally sends me the Blue Beret kits I asked for and I considered the entire matter resolved.

Our partnership continued as I made and sent him more custom parts to cast and sell and I was able to ask for more parts and he sent them to me without any problems. I thought everything was great again.
Over time I learned that what happened between me and Nova wasn't exactly an isolated incident. I talked with a few members of the joe community who tell me they had a similar if not the same experience dealing with Nova but they had their issues resolved and they chose to move on. As things were going well between me and Nova, I kept that in the back of mind but I didn't think this would ever be an issue again.

Fast forward to this past March, I texted Nova asking to get some more cast parts. He's unresponsive. I try again and still my texts are ignored. It's deja vu all over again. His continued silence is frustrating me. Weeks go by and still nothing. I once again had to reach out for help in trying to contact him. I was told in a response that he was aware I was looking for him but he still refused to return my messages. My patience now finally exhausted, I decided to send him an email with an ultimatum, telling him that I am fed up by his behavior and want to dissolve our partnership. I also demanded for the return of all parts I sent him for casting and any remaining inventory of casts made from those parts and that he can no longer offer or sell any of those items.

More time passes without any word and I then warn him that if this impasse continues, I will take this to the forums. Nova then finally responds to my text and says, "Do what you feel is necessary, when I have a chance to respond to your email I will." I haven't heard from him since.

I have been patient, reasonable, and respectable but Nova's behavior hasn't changed. I thought we were partners and friends and I tried to give him the benefit of the doubt but with his last text, that basically tells he doesn't give a damn about maintaining or saving our partnership or friendship. I gave him multiple chances and all I got in return is nothing. I really didn't want to do this but he left me no choice. I hoped to keep this matter between us and settle it like two mature adults and not involve other parties but I cannot let this continue and anyone who wishes to do business with Nova in any capacity in the future must be warned of this pattern of childish behavior...